Recently we here at Mary’s Tack and Feed worked closely with Southern California Equestrian Writer and Blogger Susan Friedland-Smith as she embarked on a journey to learn Cowboy Mounted Shooting. Enjoy this Guest Post written by her about the experience! 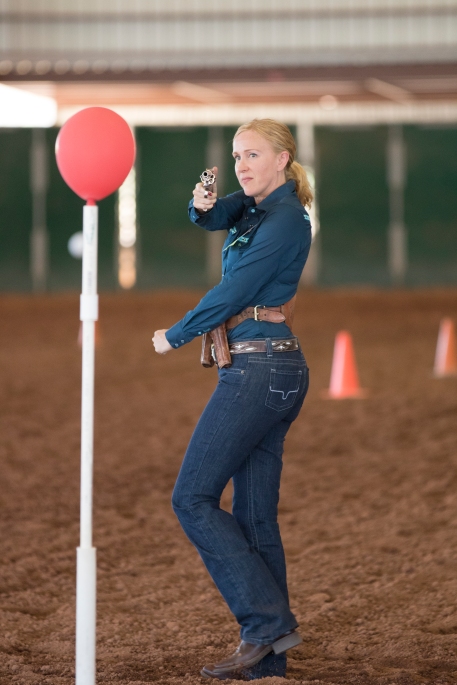 Cowboy Mounted Shooting is the fastest growing horse sport in the U.S. and after trying it first hand, this English equestrian with no firearms background, can see why. I recently had an Old West of a good time–wielding a six-shooter and blasting balloons to smithereens from the back of a horse while participating in a clinic with Kenny Lawson of California Peacekeepers from Valley Center.

In order to channel my inner Annie Oakley for the occasion, I first made a trip to Mary’s Tack and Feed to get expert advice on how to look Western. After multiple wardrobe changes, a lot of laughter, and probably too much time in the fitting room, I settled on a lightweight Cruel Girl snap-front shirt in midnight blue, Kimes Ranch Jolene jeans, and the comfiest Ariat Round Up Wide Square Toe Boots. I also got an Ariat belt which I will definitely wear again with my riding breeches.

At the beginning of the clinic, Kenny along with co-clinician Dan Byrd, a former polo player, demonstrated their World Champion mounted shooting skills so we students could visualize what it’s supposed to look like. When I first heard the thunderous gunfire, I got the giggles because it was so shockingly loud. I wasn’t sure how I’d fare when I began shooting with the bomb-like sound close up, but thankfully they provided earplugs for us (the horses typically wear them too).

The other attendees and I began learning the sport unmounted because we had to cover the basics of gun safety. Blanks are used for Cowboy Mounted Shooting, but they contain a caustic black powder which sprays out to pop the balloons if your aim is on target.

For our first exercise, all the other newbies and I literally pointed our index fingers in an imaginary gun shape while on foot aiming at the tall poles, each outfitted with a single balloon on top. We were instructed on how to shoot straight with our arm extended and then to do a cross-body shot, with our shooting arm aiming across our torso, pointing the opposite direction.

Next we were given leather holsters. I was surprised at just how girdle-tight and high up on our waists they were supposed to sit. Then we were entrusted with not one, but two revolvers.

The revolvers were about two pounds apiece which doesn’t sound that heavy, but if you are not used to the repeated motion of drawing, shooting, and replacing into the holster, your wrist might get a little sore by the end of the shooting session.

It was hard for me to grab the first gun (on my left) without looking down and then later, after my rounds were fired, place it in the holster again without looking, then grab the gun on my right. It didn’t occur to me to ask until the clinic’s end, “So are these real guns?”

Once we were outfitted with our shooting gear, we practiced shooting from the ground, while walking past our balloon targets. Kenny instructed us to draw the left one first, take our five shots, put the weapon back into the holster without looking, then draw the right one and repeat the process.

The timing of when to aim, cock, then fire took some getting used to, and I was pleasantly surprised when I actually shot most of the balloons on my first round. And when I missed, it gave me the determination to do better next time. I can see how this sport is addicting.

I’ve been riding for decades, and I know how to mount and dismount a horse, but I felt like a complete greenhorn trying to get on and off my horse while wearing the holster with the guns. It added another level of complication to fairly simple equestrian skill. Once I was in the saddle atop Buttercup and later Flipper, the clinicians took turns riding alongside, coaching me on when to shoot and where to go. Without their helpful narration, I would have been much less successful.

“I think I’m only going to do this from a walk,” I said at one point as the added layer of challenge–to aim, shoot, and fire while also steering a horse through a specific pattern, sunk in. I had flashbacks to riding off course in an equitation class.

Kenny said I should go as slowly as I liked and that the people he trains who begin at a slower clip tend to progress faster, because they are perfecting technique. He affirmed my turtle pace, stating that riders who come in thinking it’s all about the speed can get themselves into a dangerous situation. By the end of the clinic I was comfortable enough to trot through the course, and was amazed at how the complexity of multitasking–listening to the coaching, steering through the pattern, and shooting–increased by going just a little bit faster.

The Draw of Cowboy Mounted Shooting

One of the cool aspects of mounted shooting is that any breed of horse is welcome in the sport. Obviously, speed is important as well as the ability turn quickly, so Quarter Horses dominate. As a Thoroughbred owner I asked if they ever saw Thoroughbreds compete and the answer was yes. And I learned that riders can compete at essentially any age. They told us of a gentleman who is 83 and still competing, and there are classes sans firearms for children under 12.

Dan said that cowboy mounted shooting is really all about angles and strides, to which I said, “Just like jumping!” A weathered handbook that showed dozens of all the possible mounted shooting course options surfaced, and I eagerly looked at an advanced course and realized that once a rider becomes proficient on the shooting part, the level of difficulty and complexity of the various patterns would keep the riding challenge fresh. 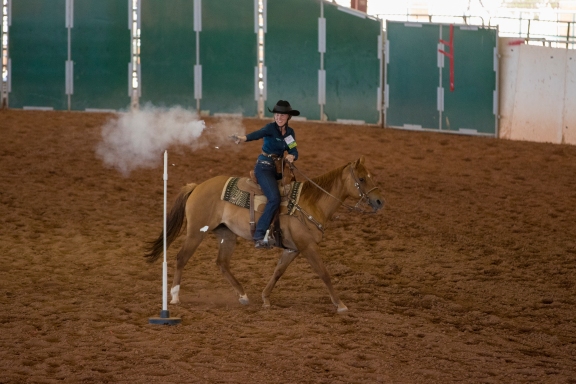 Going Out With a Bang

At the start of the clinic Dan passed out 3×5 cards and told us to write down our three goals for the day. Mine were as follows:

At the end of the clinic, Dan had us read all of our goals aloud to the group. I’m happy to report that I met all three of my goals and mentally jotted down a fourth one:

Cowboy Mounted Shooting was one of the most fun and challenging experiences from the saddle I have ever enjoyed. You should definitely give it a shot–you’ll literally have a blast.

Susan Friedland-Smith is a middle school teacher who blogs at Saddle Seeks Horse (www.saddleseekshorse.com) about the everyday equestrian lifestyle and her off-track Thoroughbred. Follow her on Instagram and Facebook for more horsey adventures. Photos courtesy of Vanessa Hughes.