Tomorrow is President’s Day! Many of our past Presidents kept pets at the White House. Dogs like: Checkers Nixon, Bo Obama, and Feller Truman. Cats like: Socks Clinton, Nip, Tuck and Snowflake Coolidge.  Many of our countries illustrious  leaders were also phenomenal horsemen. Whether family pets, or trusted steeds who bravely carried them into  battle, our presidents cherished and cared for their horses with the highest standard! Here is a glimpse at a few: 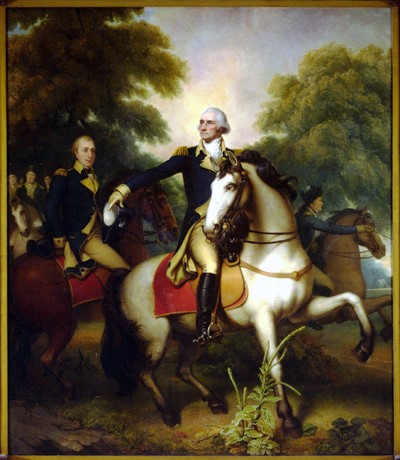 Painting of President George Washington and Blueskin by Rembrandt Peale.

George Washington, our first president, was an avid foxhunter who spent many hours a day in the saddle. Thomas Jefferson spoke of President Washington as being “the best horseman of his age, and the most graceful figure that could be seen on horseback.” Of the five stallions Washington owned, the most notable  were Nelson and Blueskin, whom he rode during the American Revolution. Nelson was a 16hh chestnut with lots of chrome. He was President Washington’s preferred mount during war since Nelson would bravely charge into battle as he was less spooky with gunfire and cannons. Can we say “bombproof”! Blueskin received his name from the deep blue grey hue of his coat. He was full of stamina and endurance thanks to his half-Arabian heritage. After the war, both Nelson and Blueskin retired to Mt. Vernon and were spoiled for years to come. Nelson lived to the age of 27. 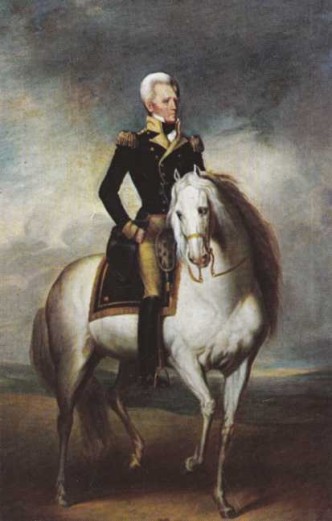 Andrew Jackson was passionate about horses from a very early age. He even worked as a saddle maker as a child. Years before he became the 7th U.S. president, President Jackson was a famous owner and breeder of Thoroughbreds in Tennessee. His most prized race horse, Thruxton, had his lineage traced back to the Godolphin Arabian… and even sparked a duel between President Jackson and Charles Dickinson (a famous American attorney at the time – not the 19th century British writer). When he was elected to office, President Jackson, took his horses with him and ran his racing stable out of the White House. His other horses included his favored Sam Patch (pictured above), Lady Nashville, Emilie and Busiris. 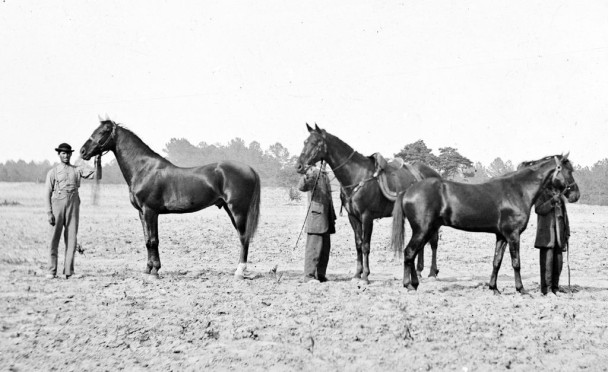 Our 18th President, Ulysses S. Grant also became obsessed with horses at an early age. President Grant excelled in horsemanship while at West Point and was revered and admired as a talented rider throughout his life. He owned many horses over the course of the American Civil War- some gifted to him, most acquired. Cincinnati, a handsome 17hh Thoroughbred by a famous racing sire, Lexington, was one of President Grant’s favorites. Many of the paintings and statues of President Grant depict him riding Cincinnati. 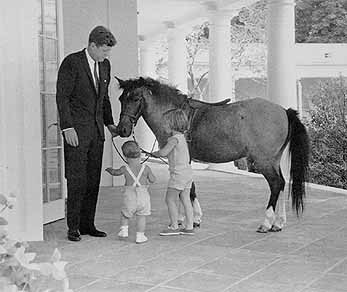 Just about everyone has seen the sweet pictures of President John F. Kennedy’s daughter, Caroline, and her roany pony, Macaroni. Given as a gift, Macaroni would frequently visit the White House. Although President Kennedy (and John Jr.) were severely allergic to animals, he still encouraged his wife and Caroline to ride. First lady, Jacqueline Bouvier Kennedy, grew up riding and competing in horse shows on the East Coast. She continued riding and foxhunting well into her years. 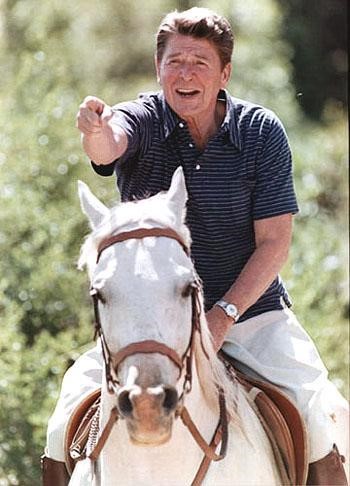 Playing young cowboy roles during his early Hollywood career, Ronald Reagan fell in love with horses. During his term as our 40th President, a special secret service agent was assigned to be President Reagan’s riding partner, it took a while to find someone who could keep up with him! His ranch in California, Rancho del Cielo, became known as the “West Coast White House.” He once told a columnist, “most of my thinking about speeches comes–doing ranch work, not sitting at a desk.” President Reagan had a several favorite horses- Little Man, who had a tragic accident out in pasture, and El Alamein, who was a gift in 1981 from the President of Mexico, José López Portillo.